Ron Kensey and Paul Kennon Chaney have the idea for Kennon

You never know where inspiration will strike, but it struck Ron Kensey and Paul Kennon Chaney in 1984 at a Los Angeles garage sale — and Kennon Products was born. With scissors and success built upon a $500 display ad, the pair started producing aircraft sun shields. What sparked the idea was seeing a highly reflective insulation product used in construction. Moonlighting from Ron’s suburban garage, the two constructed the sun shields themselves out of that material, and fulfilled all the orders. Figuring every plane owner needed what they were selling, they got lists of local aircraft owners at the local library. From there, the tedious task of placing cold calls, selling one sun shield at a time.

Looking to expand their audience, Kennon attended the 1986 EAA AirVenture Airshow in Oshkosh, Wisconsin. Known as the “Woodstock for Aviators,” the show provided a proving ground for Kennon’s aircraft sun shields. They positioned two planes, side-by-side, for the company’s demonstration. One had a competitor’s sun shade and one was fitted with Kennon’s high-performing airplane sun shield. In real-time, attendees were impressed with the improvement Kennon’s cockpit sun screens made. Later that year, Ron Kensey packed up his family, his company, and all of their belongings into a converted school bus and headed for Sheridan, Wyoming. 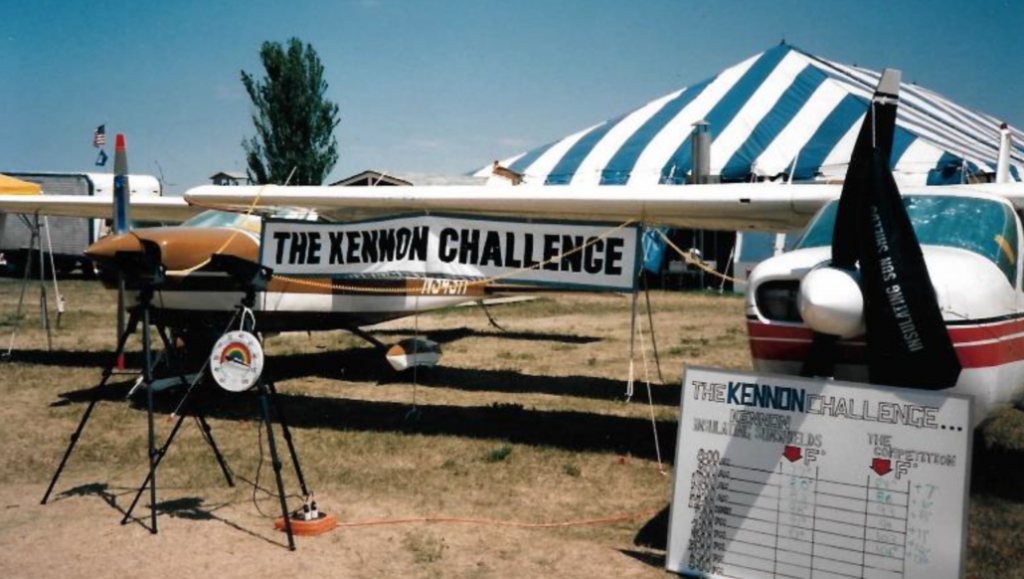 Ron’s turning point came in 1989 when he left his career and went full-time with Kennon Sun Shields. A challenging but culture-defining lesson accompanied his decision. In 1989, Aviation Consumer magazine published an article recommending Kennon Sun Shields, and sales took off. Soon after, the same magazine issued a service alert on the product. Reports had come to light of surface scratching and windshield damage caused by the airplane sun shield. Ron responded swiftly, devising a solution to the issue and contacting every sun shield customer to address it. His actions garnered attention and praise for Kennon’s transparency and honesty. Thanks to Ron’s response, Kennon recovered from this report, and aircraft sun shield sales continued their steady upward trajectory.

Monthly ads in Trade-a-Plane and other publications along with continued showings in Oshkosh, expanded Kennon’s brand and brought new opportunities. Kennon was the official provider of preheaters for the famous Iditarod Air Force. While in Alaska, Ron met Lynn Cunningham, a well-known manufacturer, and designer of high-quality boat covers and aircraft covers. Ron saw an opportunity to expand Kennon’s catalog and asked Lynn to join Kennon in Wyoming. 1993 also saw Kennon change its manufacturing process by adding its first sewing machine. Combining materials in this way meant new product categories, such as aircraft engine, wing, and tail covers.

In 1995, an aerospace engineer at Wright Patterson Air Force Base contacted Ron after seeing a set of Kennon Sun Shields in a Beechcraft Bonanza. He requested sets for the F-15s that were deployed in Desert Storm. This order opened new doors for the company, quickly expanding their many military aircraft platforms. Kennon products were suddenly in use around the world, protecting US military, commercial, and private aircraft. Ron traveled to the Asian Defense Show in Singapore to showcase Kennon aircraft sun shades. Shortly after, Ron and Lynn visited Malaysia, Pakistan, the Middle East Defense Show in the United Arab Emirates, Italy and the United Kingdom. Cutting and sewing were still manual manufacturing processes when Kennon purchased an automated Computer Numerical Control (CNC) table. It decreased production time, quickly cutting nested textiles with digitized patterns. The table also significantly reduced the space required for storing hardcopy patterns.

Kennon had grown into a company heavily rooted in cut and sew operations with approximately 15 employees by the 1990s. Lynn decided to leave the company, which now included a full line of winter aircraft covers. Soon after, we made a move toward automated manufacturing processes with the purchase of a CNC Table which cut nested textiles with digitized patterns, significantly reducing the space and time required for storing hardcopy patterns and cutting/marking each unit by hand.

Kennon’s offerings grew again in response to the national tragedy September 11, 2001, now including a wide range of military aircraft covers in addition to sunshields. Ron recalls what seemed like $250,000 worth of military orders placed overnight, covering most aircraft platforms mobilized in response to the attacks. At the time, aircraft covers were still patterned on the aircraft, by hand. Ron would accompany Production staff to bases around the country to collect information and develop patterns to facilitate the efficient and effective coverage of our country’s aircraft. In response to the ever-increasing demand and to better support and supply the US Military, Kennon hired retired Air Force Senior Master Sergeant Todd Pierson as a Military Sales Liaison.

During the Iraq and Afghanistan Wars, heat and sand put new stresses on military aircraft, and Kennon stepped up with more custom manufactured aircraft covers, cowl plugs, and sun shields. Creating the patterns was still a hands-on process, so Ron traveled to military bases to measure and design covers and aircraft cowl plugs for each aircraft platform. Eventually, Kennon covers protected most of the platforms mobilized in both wars. In response to the growing military demand and better support of all branches, Kennon hired retired Air Force Senior Master Sergeant Todd Pierson as a military sales liaison.

Military squadrons have a proud tradition of putting insignias and emblems on their aircraft. With the purchase of their first large-format fabric printer, Kennon added the ability to put these logos on their covers. Kennon was contracted for the design and manufacture of UH-60 Blackhawk Upturned Exhaust Covers (UES Covers) for Sikorsky Aircraft and additional high-volume products such as Lockheed’s F-35 Solar Shields

Joe Wright joins the company as an engineer

Kennon made another strategic hire when Joe Wright joined the company as its third engineer. He began by assisting the operations team, building greater efficiency into the company’s products and processes. His impact was also felt in the company’s culture when he began the “All Hands Meeting.” The meetings continue to this day — currently, all of the employees meet twice a week, ingraining an attitude of company-wide transparency.

With its growing engineering team, Kennon began to tackle an array of unique design-and-manufacture projects. Examples of out-of-the-box projects were covers for a Boeing 747 for the Sultan of Bahrain and another for Sikorsky helicopters. Another growth area was in covers that did more than just keep the weather out. Rodents can be a big problem for some customers, so the company began producing rodent-proof wellhead covers for oil and gas companies. They also opened a new product line, making rodent-proof bar covers; the first was for the Los Angeles Dodgers Stadium. Expanding product lines, accompanied by the physical demands of plastic patterning, was an ongoing and growing concern. The response was to move to an all-digital design process using Computer-Aided Design (CAD) systems. Greater precision, easier prototyping, and quicker turnarounds are just some advantages.

Growth continued in all facets of the business, and Joe Wright, who joined the company as an engineer, was named the new leader of the business. Continued growth in engineering drove Kennon’s continued success, receiving SBIR awards. One was for a lightweight inflatable for the Naval Air Systems Command (NAVAIR). Another was for the V-22 Osprey VIP Cabin Liner (utilizing the clamp, initially designed in Kennon’s first SBIR award in 2006). Responding to Department of Defense contract requirements, Kennon brought on Becky Cooper to implement a Quality Management System (QMS). Kennon achieved ISO 9001 certification, and the QMS formalized an already strong culture of continuous improvement. Bolstering its claim of being Sheridan’s best employer, Kennon implemented an Employee Stock Ownership Program (ESOP), making the employees owners.

Strong production and engineering output, along with projections of increasing demand, caused the company to reevaluate its strategic growth plan. With that, the company revised its vision statement to: “Kennon is inspired by and committed to the protection of high-value assets, from aircraft and other essential equipment to the most important asset: life.” To address the growing demand for their products, the company added a second manufacturing shift. Another change was an intentional trimming of product lines, including ones that had helped see the company through slow times. One of the businesses they let go of was graphic design and printing for the local Sheridan market. Due to further contractual requirements, Kennon became Cybersecurity Compliant (NIST 800-171) through a year-long effort.

Kennon moves into their new high-tech facility on the outskirts of Sheridan, Wyoming

Despite continuous efforts at improving efficiency, ultimately the company needed more elbow room. Even with running two shifts, 11,000 square feet was no longer adequate for the more than 60 employees. In July, the company moved into their new, custom-built, state-of-the-art engineering and manufacturing facility. The new 40,000 square foot building has plenty of space to take on a future of new and exciting projects — such as the new Kennon Door 2.0. It’s the new and improved, fire-resistant SSPD door for mental and behavioral health hospitals.

Questions about any of our products or services?